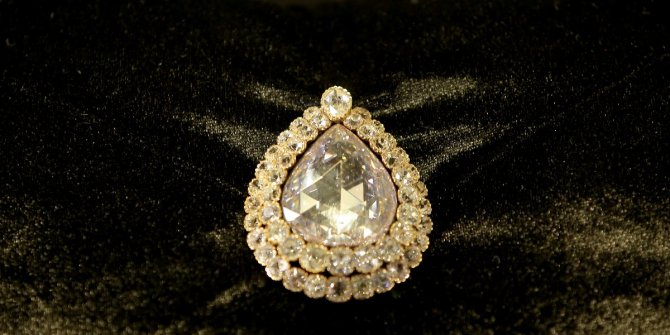 The Spoonmaker’s Diamond (Turkish: Kaşıkçı Elması) is an 86 carat (17.2g) pear-shaped diamond set in silver and surrounded by a double row of 49 old-mine cut diamonds. It’s the most valuable single exhibit in the Imperial Treasury exhibitions at the Topkapi Palace Museum. How did this unique diamond admired by the whole world and that everyone wanted to own end up at Topkapi Palace?

The story of this legendary diamond that has been the subject of movies and books is full of mystery.

The Pigot Diamond, is that you?

It has sometimes been suggested that the pear-shaped diamond is actually the historical Pigot Diamond, which got lost in the beginning of the 19th century. However, this is not supported by official documents.

The Weird Story of the Spoonmaker’s Diamond

Various stories are told about the Spoonmaker’s Diamond. According to one tale, a poor garbage collector in Eğrikapı, Istanbul, was wandering idly in a rubbish yard when he found a shiny stone, which he did not recognise. After carrying it in his pocket for a few days, he sold it to a spoonmaker, taking three spoons in return. The spoonmaker then took it to a jeweller who bought the diamond for 10 coins. The jeweller showed it to a fellow jeweller, and they discovered that this round stone was actually a diamond. Both jewellers engaged in a dispute over its ownership and when the chief jeweller of the palace heard about it, he paid both jewellers to purchase the diamond.

The story continues with the diamond being in the possession of Ali Pasha of Tepelena, then of Sultan Mehmet IV. The diamond was later processed by talented diamond designers, and it was revealed that it was a unique piece of 86 carats. The name of the gem, the “Spoonmaker’s Diamond”, revolves around its discovery in a part of Istanbul and its subsequent exchange for three spoons.

From India to France and then to Ottomans

According to another legend, a French officer is believed to have purchased the diamond in 1774 from a Maharajah in India and brought it to France. The diamond then passed through several owners until it was put up for auction in Paris. At the auction, Napoleon’s mother Letizia Ramolino, also known as Madame Mere, purchased the diamond, which was then purchased by one of the agents of Tepelene Ali Pasha, who happened to be in Paris at that time. If you want to see the world-famous gem, visit Topkapi Palace on your next adventure in Istanbul. If you wish to make the most of the story, please make a visit to ATÜ Old Bazaar, where you can discover traditional Turkish products.